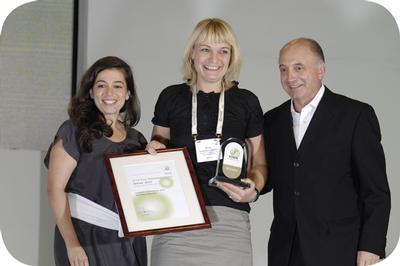 The Inspired by Iceland campaign and the Iceland Convention & Incentive Bureau (ICIB) are presented with the ICCA Best Marketing Award in Hyderabad, India on 27 October 2010.

The aftermath of the volcanic eruption in Eyjafjallajökull glacier and the ash clouds that followed are well known in the Meeting industry. But with a wave of cancellations across all sectors and what looked to be a catastrophic summer for tourism in Iceland, the real threat that emerged became the potential long-term consequences for the country’s tourism industry as a whole.

During the recent ICCA conference in Hyderabad, these challenges and the action taken by the Icelandic government, the city of Reykjavík and about 80 tourism-related companies where outlined, which resulted in the incredibly successful “Inspired by Iceland” marketing campaign. The campaign included e.g. Iceland Hour where 1/3 of the Iceland´s population participated in telling people that there has never been a better time to visit.

Martin Sirk, CEO of ICCA, commented on his organisation’s award: “This year’s BMA competition was as tough as we’ve ever seen, and once more we’ve got a very worthy winner!  The ICCA Best Marketing Award doesn’t exist simply to reward excellent work: it’s there to recognise the most unique and brilliant marketing concepts that our industry can create. Turning a disaster like the volcanic eruption into such a positive result, harnessing the power of a whole nation in a way we’ve never seen before, is a fantastic and inspiring marketing story.”

The reward is first and foremost an acknowledgement of the work achieved after the eruption started.  It will help those involved in the country’s Meeting industry to showcase one of the key strengths that characterises Iceland as a destination—that as an industry we are quick to adapt and respond to different challenges.

Katrín Júlíusdóttir, Minister of Industry in Iceland, commented: “To see so many people back our campaign has been incredible. We’ve been able to tell the world that Iceland is a country that can inspire anyone who comes here. Receiving the ICCA award for the campaign is therefore a great honour and reward for everyone who has been a part of it.”

For more information on the country’s potential for meetings or incentive trips, visit the Iceland Convention & Incentive Bureau at www.icelandconvention.com and join us on Inspired by Iceland www.inspiredbyiceland.com.

Inspired by Iceland is a joint marketing effort by the Icelandic government, the city of Reykjavík, Icelandair, Iceland Express, Promote Iceland and around 80 tourism-related companies in Iceland.