Flourishing villages and farming communities, soaring mountain peaks, offshore islands and a landscape in formation make the North of Iceland a unique world of its own.

In the western part of the region, volcanic forces are no longer active, and since the end of the Ice Age the landscape has been moulded by rivers into smooth hills interspersed with some of Iceland’s finest angling rivers. On either side of Eyjafjörður rise high, ancient mountain ranges opening here and there into valleys, and in the north, marine erosion has created splendid cliffs. This area is popular with mountain hikers.

The Midnight Sun is an extraordinary spectacle in these northern latitudes: around the summer solstice, the sun sinks down to touch the horizon before rising again in breathtaking tones of red and gold.

Further east, other forces are at work: fresh lava flows, fissures and gullies are clues to recent volcanic activity. It is only a little over twenty years since the last eruption in the geothermal area adjacent to Mt. Krafla, and the unrest in the earth continues. 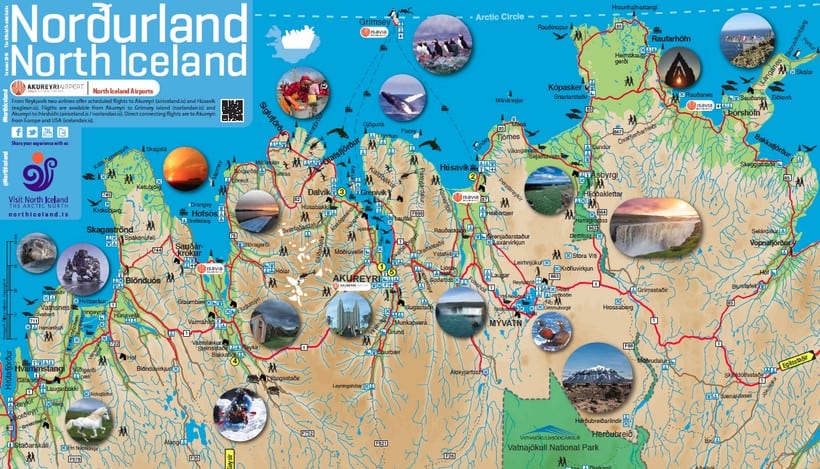 In ancient times a catastrophic glacial flood smashed through rock to gouge out the canyon of the river Jökulsá á Fjöllum and the huge sunken valley Ásbyrgi, which now form a magnificent National Park. Just a short distance away is the beautiful Lake Mývatn, famous for its picturesque natural surroundings, geothermal activity, and unique birdlife.

Most of the lowland areas have been inhabited since time immemorial by farmers and fishermen. In recent times remote spots such as the region east of Eyjafjörður, and Melrakkaslétta and Langanes in the far northeast, have become largely uninhabited, but they remain popular with travellers in search of peace and unspoiled nature. 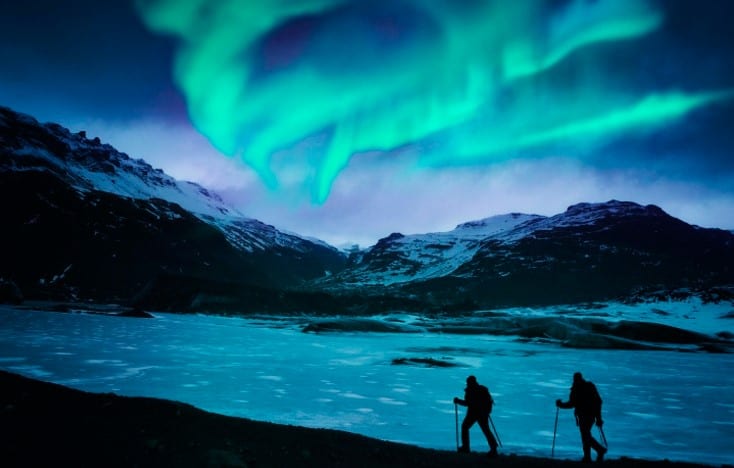 Tourist services in the region reflect aspects of local history and ways of life. In Húnavatnssýsla and Skagafjörður visitors can see the sites of many of the important events in the classic Icelandic sagas. Seals can be observed at play offshore; the Selasetur seal center in Hvammstangi is an excellent place to gain insight into seals and their way of life. Whales can be spotted off Eyjafjörður and Skjálfandi bay, and Húsavík is home to a whale museum. In the first half of the 20th century, the “Herring Boom” brought unprecedented prosperity to many Icelanders, and the atmosphere of those times is recreated at Siglufjörður, one of the leading herring ports of the time. Another interesting destination is Hafíssetur, the pack-ice exhibition in Blönduós, where visitors can learn about “the land’s ancient enemy” through a graphic and text exhibition. Tucked away in the south part of Eyjafjörður is a very original museum: The Museum of Small Things (Smámunasafnið). Another very interesting museum, located at Svalbarðseyri, is The Icelandic Folk Art Museum (Safnasafnið).

Over the centuries, Icelanders relied on the horse for all transport and farm work, and Skagafjörður is especially famous for its horses and equestrian traditions, while horseback riding tours are available all over the north. Skagafjörður also offers the thrills of white-water rafting, and at the Icelandic Emigration Centre in Hofsós visitors can learn about emigration to the New World in the 19th century, when 20% of the population headed west in search of a better life.

The Capital of the North is Akureyri, a centre of education, culture and services in Eyjafjörður fjord. Akureyri has a full summer programme of events, arts, entertainment and activities.